Sounding the Alarm Regarding Dementia and Firearms 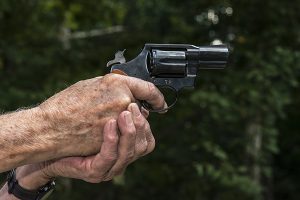 Dementia and guns: Learn more about this important issue in this article.

With an impassioned level of debate rivaling the Hatfields and McCoys, it appears insurmountable to arrive at a resolution on the issue of gun control. Yet in spite of which side of the issue you are on, there’s one little-discussed situation that should cause us all to take pause: the alarming combination of dementia and firearms.

About 33% of all aging adults in the U.S. report owning a gun, and an additional 12% reside in the home of a gun owner. Bearing in mind that around 9% of people over age 65 have some type of dementia (and that figure is anticipated to more than double by the year 2050), it translates to an incredible number of elderly with dementia living with firearms. Coupled with erratic states of confusion, aggression, and other difficult behaviors, having guns in the house sets the stage for possible tragedy.

In the state of Washington alone, a government study discovered that thousands of seniors (54,000) noted memory decline and confusion, as well as access to firearms – and as many as 15,000 of the respondents stated that the firearms that they had access to were both unsecured and loaded.

In fact, in a single year alone, a Kaiser Health News report revealed in excess of 75 reported homicides or suicides committed by people with dementia, along with the additional instances of guns being brandished against those closest to them – family members, neighbors, caregivers. Additionally the suicide rate for seniors is higher than for any other age bracket, with guns being the most common source for senior men, as stated by the CDC (Centers for Disease Control and Prevention).

The Alzheimer’s Association recommends removing firearms from the houses of those with dementia; however, if that isn’t an option families are able to consider, it’s imperative that you be certain firearms are stored safely – locked, unloaded, and separate from ammunition. A bit of creativity can go a long way as well – as an example, replacing real guns with toy models that allow, for instance, a person who was a devoted hunter to safely maintain his connection to that hobby.

For useful information on keeping those with dementia safe, contact the skilled dementia care professionals at Midnight Sun Home Care. Our fully trained and experienced caregivers are proficient in helping to manage some of the more challenging facets of dementia, and in identifying when your loved one might be in crisis and require medical help. Our dementia respite care services enable family caregivers to rest and recharge, knowing their family member is in competent and caring hands. Give us a call at (907) 677-7890 or contact us online to find out more about all of our Alaska memory care services and all the communities we serve.