Know the Risks Before Trying Alternative Supplements for Alzheimer’s Disease 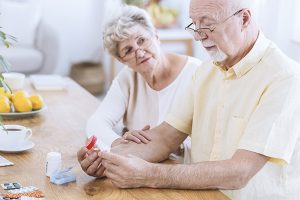 Always get the doctor’s approval before trying anything new.

As the saying goes, if it sounds too good to be true, it probably is. That could very well pertain to the recent influx of corporations touting alternative supplements, dietary programs, and herbal concoctions in order to cure, or at the very least minimize, the ramifications of Alzheimer’s disease. The Alzheimer’s Association would like to advise us, however, to go forward with caution when looking into treatment ideas for a loved one with dementia – and always get the doctor’s approval before trying anything new.

A number of the latest trends in treating the condition, which are outside of the FDA’s research and approval, and generally are based on personal reviews in place of fact-based science, include ginkgo biloba, coral calcium, coconut oil, huperzine A and CoQ10 – an antioxidant produced naturally but in declining levels as we age. In particular, the Alzheimer’s Association reports their concerns about these and other popular alternative treatments:

The conclusion? Consult your senior loved one’s personal physician about treatment plans for Alzheimer’s disease and stick to their recommendations carefully. For additional details on safe and effective Alzheimer’s care, delivered within the convenience of home, call on Midnight Sun Home Care’s expert dementia care team.  Our care staff are professionally trained and knowledgeable in patient and compassionate Alzheimer’s and dementia care, allowing seniors to maintain the highest possible quality of life, safety, independence and respect. Call us at (907) 677-7890 or contact us online to learn more about how we provide companion care services Matanuska-Susitna AK families trust and recommend.