Whether it’s a parent, grandparent or relative, most people know someone affected by Alzheimer’s. Today, 5.4 million Americans have Alzheimer’s, which is the six-leading cause of death in the United States, according to the Fisher Center for Alzheimer’s Research Foundation.

Alzheimer’s is the most common form of dementia and causes problems with memory, thinking and behavior. Alzheimer’s is not a part of routine aging although it usually shows up in people age 65 and older. It’s a disease affecting the entire family. When people suffering from Alzheimer’s can no longer care for themselves, family members must make difficult choices about care options.

Midnight Sun Home Care wants families to understand they’re not alone. Many of our clients are living with varying stages of Alzheimer’s and our experienced caregivers understand how to help. So, if a member of your family or someone else you know is struggling with Alzheimer’s give us a call and we’ll figure out the best way we can help. 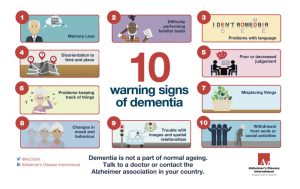